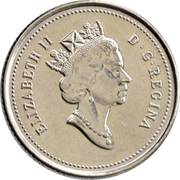 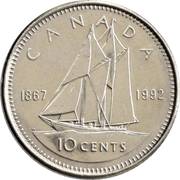 The portrait in right profile of Elizabeth II, when she was 64 years old, is surrounded with the inscription "ELIZABETH II D • G • REGINA"

The Bluenose under sail, a Canadian schooner from Nova Scotia, a celebrated racing ship and a symbol of the province, accompanied with the dates "1867-1992", is surrounded with the face value and the inscription "CANADA"