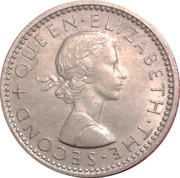 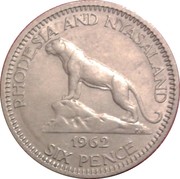 Leopard facing left standing on rock, legend above, date and denomination below

Paul Vincze (15 August 1907 in Galgagyörk, Hungary – 5 March 1994 in Grasse, France) was a Jewish-Hungarian designer of coins and medal, and sculptor.

» Buy coins from Rhodesia and Nyasaland