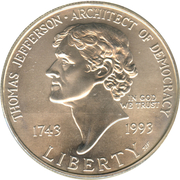 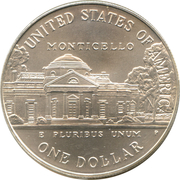 The 1993 Thomas Jefferson Commemorative Silver Dollar was minted in proof at the San Francisco Mint and uncirculated at the Philadelphia Mint. Surcharges raised from the sale of coins went to the Thomas Jefferson Memorial Foundation to carry forth Jefferson’s bold vision through education and the preservation of Monticello. A portion of the surcharges also went to the Corporation for Jefferson’s Poplar Forest to preserve Jefferson’s retreat home.

In addition to individual coin sales, the US Mint offered a special Coin & Currency Set to pay tribute to Jefferson’s role in creating America’s decimal coinage system. The special set contained the uncirculated silver dollar, a 1994 matte proof Jefferson Nickel, and a crisp 1976 $2 bill. This set sold 167,703 units and was priced at $34.00 during the pre-issue discount period and $39.00 during regular pricing.

Members from this site want to exchange it: SteveV, zdravko, Griffindian, Coincorner1986

Bullion value: USD 18.69 Search tips
This value is given for information purpose only. It is based on a price of silver at 777 USD/kg. Numista does not buy or sell coins or metal.