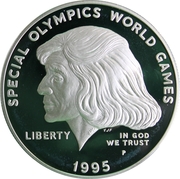 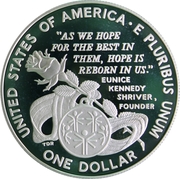 Portrait of Eunice Kennedy Shriver, Founder of the Special Olympics

A rose, a Special Olympics medal, and a quote from Eunice Shriver.

Lettering:
UNITED STATES OF AMERICA · E PLURIBUS UNUM
"AS WE HOPE
FOR THE BEST IN
THEM, HOPE IS
REBORN IN US."
EUNICE
KENNEDY
SHRIVER,
FOUNDER
TDR
ONE DOLLAR

The 1995 Special Olympics World Games Silver Dollar was issued to honor the competitions created for people with intellectual disabilities. The Special Olympics are focused on developing self confidence, social skills, and a sense of accomplishment for the participants. In 1995, the Special Olympic Games were held in Connecticut.

Eunice Kennedy Shriver was the first living female depicted on US coinage. On the coin, she is credited as the founder of the Special Olympic Games, although some credit Anne Burke and consider the coin inaccurate.

The 1995 Special Olympics Silver Dollar was issued in both proof and uncirculated versions. The proof coins were minted at Philadelphia and the uncirculated coins were minted at West Point. The maximum authorized mintage across both versions was 800,000. The coins were sold individually, or as a 2 Coin Set, which included the proof silver dollar and a 1995-S Proof Kennedy Half Dollar. A single corporate benefactor reportedly purchased 250,000 coins to save the program from financial loss and embarassment. These coins were later given to Special Olympics athletes in 1998.

Bullion value: USD 15.59 Search tips
This value is given for information purpose only. It is based on a price of silver at 648 USD/kg. Numista does not buy or sell coins or metal.