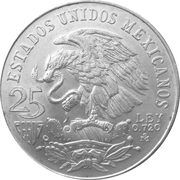 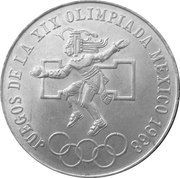 The Mexican coat of arms (eagle facing left with a legend at the top), with the value to the left, and the silver purity and mintmark to the right

The Olympic rings beneath an Aztec ball player facing left with the legend surrounding. 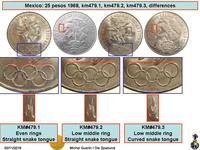 Bullion value: USD 12.37 Search tips
This value is given for information purpose only. It is based on a price of silver at 764 USD/kg. Numista does not buy or sell coins or metal.