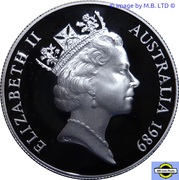 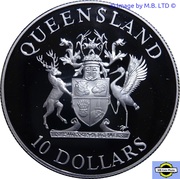 Coat of Arms of Queensland:
A Red Deer & Brolga, supporting a shield which features the heads of a Bull and a Ram, a Sheaffe of Wheat and Gold rising from a pile of Quartz. Two stalks of Sugarcane surround the State Badge, a Maltese Cross with a centred Crown of St. Edward.

Released by the RAM in 1989 to commemorate the State of Queensland is this $10 Sterling Silver Proof (.925) coin. It was released in a capsule in plush beige case. 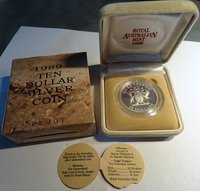 Uncirculated versions were also released in a Sand coloured Coincard.

This 1989 $10 coin is the fourth of a series which features the coat of arms of the individual States and Territories of the Commonwealth of Australia. The coin features the official Queensland Coat of Arms. This was the very first coat of Arms of all the Australian States.

Bullion value: 16.62 USD Search tips
This value is given for information purpose only. It is based on a price of silver at 899 USD/kg. Numista does not buy or sell coins or metal.