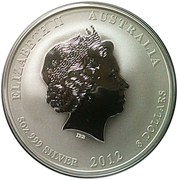 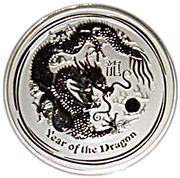 The Perth Mint Lunar silver series are issued as legal tender under the Australian Currency Act of 1965.

The reverse of 2012 silver dragon coin depicts a long, scaled, serpentine dragon, a symbol of power, strength and good luck. The reverse also includes a depiction of a “pearl of wisdom. The Chinese character for “dragon” and the inscription “Year of the Dragon” also appear in the design with the Perth Mint’s traditional “P” mintmark.

Bullion value: 92.23 USD Search tips
This value is given for information purpose only. It is based on a price of silver at 593 USD/kg. Numista does not buy or sell coins or metal.