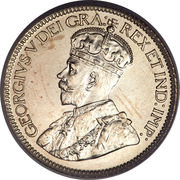 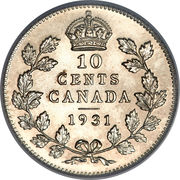 The portrait of George V facing left surrounded by an inscription.

The face value, accompanied with the inscription "CANADA", is surrounded with two maple boughs and a crown. 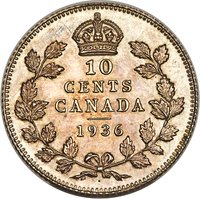 © Image courtesy of Heritage Auctions
(Heritage Auctions:) The background regarding the Dot issues (Cent, 10 Cents, and 25 Cents) relates to the passing of George V and the abdication of the throne by Edward VIII. It was commonplace for the bust of the king, in this case, George V, to remain on coinage through the remainder of the calendar year, while the creation of dies for the new king was underway. However, Edward VIII's abdication on December 10, 1936, halted production of the obverse, leaving less than 30 days to decide how to handle the following year's currency, and not enough time to complete obverse dies for successor George VI. The result was to continue using the effigy of George V, but to add a dot on the reverse--either below the date, as it is on the 1936 Cent, or below the bow on the wreath as it is on the 10 and 25 Cents-to confirm the issuance was for 1937. Despite the shortage of these denominations, the Cent and 10 Cents were never released into circulation, with speculation that the whole of the mintages was melted. Though, that was not the case, as there are three known examples of the 1936 Dot Cent and 4 known of the 1936 Dot 10 Cents.

Bullion value: USD 1.45 Search tips
This value is given for information purpose only. It is based on a price of silver at 777 USD/kg. Numista does not buy or sell coins or metal.