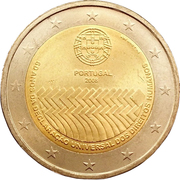 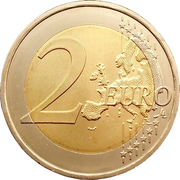 60th Anniversary of the Declaration of Human Rights

The coin shows the Portuguese coat of arms at the top, with the name of the issuing country (‘PORTUGAL’) and the year ‘2008’ just below. The lower half of the coin features a geometric design and the legend ‘60 ANOS DA DECLARAÇÃO UNIVERSAL DOS DIREITOS HUMANOS’, followed by the inscription ‘Esc. J. Duarte INCM’ in very small characters. The outer ring of the coin shows the 12 stars of the European Union.