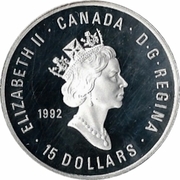 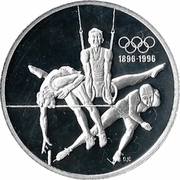 100th Anniversary of the Olympic Games

Three athletes partaking in different Olympic sports. This was one of three coins minted at the Royal Canadian Mint for the 1992 IOC Olympic coin set, which featured 15 different coins minted by five different mints.

Members from this site want to exchange it: landycollector, zdravko

Bullion value: USD 20.16 Search tips
This value is given for information purpose only. It is based on a price of silver at 648 USD/kg. Numista does not buy or sell coins or metal.