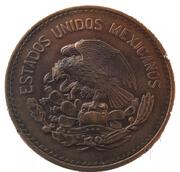 The value at the top with the radiant Liberty cap in between and the mintmark underneath, with the pyramid at the center motive along with landscape, consisting of the volcanoes Ixtaccihuatl and Popocatepetl in addition to many plants, with the value and date at the bottom. Teotihuacán (where the pyramid is located) written at the pyramid's base to the left. 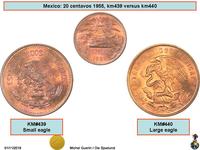