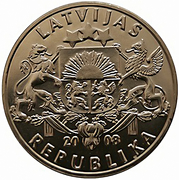 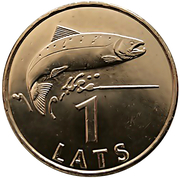 The large coat of arms (with lion and griffon supporters) of the Republic of Latvia, with the year 1992, 2007 or 2008 inscribed below, is placed in the centre. The inscriptions LATVIJAS and REPUBLIKA, each arranged in a semicircle, are above and beneath the central motif, respectively.

A salmon, the symbol of Latvia's abundant water resources, is shown jumping out of the water from left to right. The numeral 1, with the inscription LATS in a semicircle beneath it, is centered in the lower part of the coin.

Gunārs Lūsis, born 1950 in Riga, is a Latvian artist and graphical designer notable for creating the design for some of the modern Latvian coins with denominations in Latvian lats, and for authoring the logo for the Latvian presidency of the Council of the European Union in 2015.