This coin was the first coloured commemorative $2 Coin issued by the Royal Australian Mint. It commemorates Remembrance Day, the 11th of November, where at 11 am a minutes silence is observed to remember all of the fallen soldiers of all of the wars. There are three different versions of this coin.

The coin shown above is the pad printed, red coloured, non-mintmarked version which was released into circulation and also issued through RSL Clubs in this Folder/card. 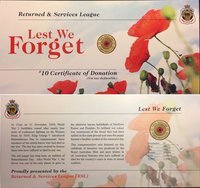 The RAM also issued a pad printed, red coloured, NCLT version with a "C" Mintmark in a coincard.

A plain version of the coin without the red poppy was also released into circulation. (See link below) 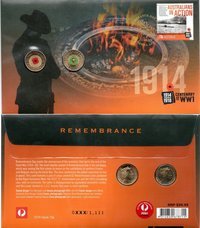 Members from this site want to exchange it: trjodea, Oh-Moon