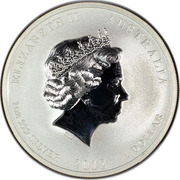 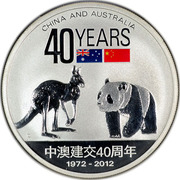 Reverse portrays the animal emblem of each country, the kangaroo and giant panda, headed by the Australian and Chinese flags in colour. The design also features the inscription CHINA AND AUSTRALIA 40 YEARS, in English and Chinese, the year dates 1972 – 2012, and The Perth Mint’s ‘P’ mintmark.