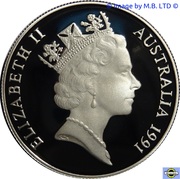 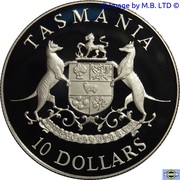 Coat of Arms of Tasmania:
A central shield representing Tasmanian industry: apples, a sheaf of wheat, a branch of hops, plus a ram. It is supported by two Tasmanian tigers, now extinct. Above the shield are a red lion with a front paw resting on a spade and pick axe.

Released by the RAM in 1991 to commemorate the State of Tasmania is this $10 Sterling Silver Proof (.925) coin. It was released in a capsule in plush green case.

This 1991 $10 coin is the sixth in a series which features the coat of arms of the individual States and Territories of the Commonwealth of Australia. The coin features the official Tasmania Coat of Arms.

Bullion value: 16.62 USD Search tips
This value is given for information purpose only. It is based on a price of silver at 899 USD/kg. Numista does not buy or sell coins or metal.