The portrait in right profile of Elizabeth II, when she was 27 years old, is surrounded with the inscription "ELIZABETH II DEI GRATIA REGINA" (Elizabeth II, Queen by the grace of God)

Translation:
Elizabeth II Queen by the Grace of God
M·G·

A beaver, over the inscription "CANADA", is surrounded with the face value, flanked on both sides by a maple leaf.

This refers to the maple leaves on either side of the "5 CENTS" and their proximity to the beading on the coin's rim. The 'near' variety is almost touching the rim. 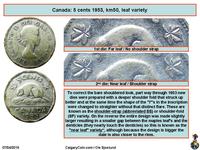 The shoulder fold refers to two faint lines/markings on the right-side of Elizabeth's shoulder, extending over toward her lower back.

NOTE: the image depicted on this page shows features near leaves and no shoulder fold.