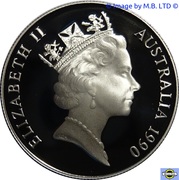 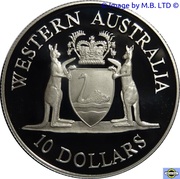 Coat of arms of Western Australia:
Two Red Kangaroos, each holding a boomerang, supporting a shield which features the black swan on a rippled base. Above the Black Swan is St. Edward's Crown between two sprigs of kangaroo paw proper

Released by the RAM in 1990 to commemorate the State of Western Australia is this $10 Sterling Silver Proof (.925) coin. It was released in a capsule in plush black case.

This 1990 $10 coin is the fifth of a series which features the coat of arms of the individual States and Territories of the Commonwealth of Australia. The coin features the official Western Australia Coat of Arms.

From city to rugged coastal terrain and arid desert, Western Australia, Australia's largest State covering more than a third of the continent, is more varied than any other.

Bullion value: 16.86 USD Search tips
This value is given for information purpose only. It is based on a price of silver at 912 USD/kg. Numista does not buy or sell coins or metal.