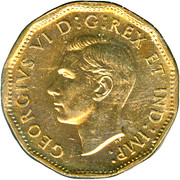 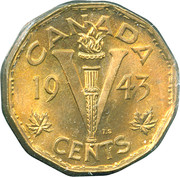 The portrait in left profile of George VI is surrounded with the inscription "GEORGIVS VI D:G:REX ET IND:IMP:" meaning: George V, by the grace of God, the King and Emperor of India

To help promote the war effort, this new design consists in a central "V", meaning both victory and the face value with the inscription "CENTS" underneath flanked by two maple leaves, on which is superimposed a torch, with on both sides a part of the year and above the inscription "CANADA". Around the rim is the Morse code message "We win when we work willingly".