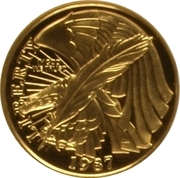 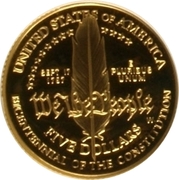 Lettering:
LIBERTY
IN GOD WE TRUST

A quill pen positioned horizontally, with “We The People” written in calligraphy and an arc of thirteen stars.

Members from this site want to exchange it: Emiel p, jbcolorado

Bullion value: USD 433.58 Search tips
This value is given for information purpose only. It is based on a price of gold at 57 633 USD/kg. Numista does not buy or sell coins or metal.