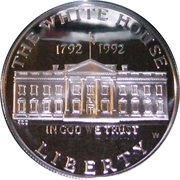 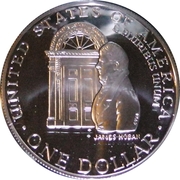 200th Anniversary of the White House

North Portico of the White House dividing the dates above

Translation:
United States of America
Out of Many, One
One Dollar
James Hogan

The maximum authorized mintage for the White House Silver Dollar was set at 500,000 coins. This represented the lowest level established to date for a modern commemorative silver dollar, a fact that was highlighted within promotional materials.

A complete sell-out of the maximum authorized mintage was achieved, and the relatively low mintages drove prices higher on the secondary market. At their peak, prices had risen to four times the issue price. Prices eventually fell as the excitement faded and subsequent issues had lower mintage levels. For present-day collectors, the 1992 White House Silver Dollars are priced primarily based on the silver content.

Surcharges raised from the sale of coins were paid to the White House Endowment Fund and used to support the White House collection of fine art and furnishings as well as for the maintenance of the public rooms.

Members from this site want to exchange it: geostring, alpozenalp

Bullion value: USD 17.42 Search tips
This value is given for information purpose only. It is based on a price of silver at 724 USD/kg. Numista does not buy or sell coins or metal.