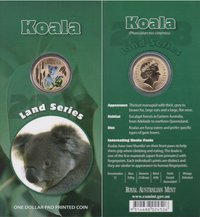 Koalas have two "thumbs" on their front paws to help them grip when climbing and eating. The Koala is one of the few mammals (apart from primates) with fingerprints. Each individual's prints are distinct and they are similar in appearance to human fingerprints.