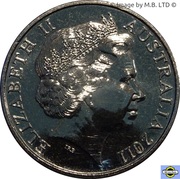 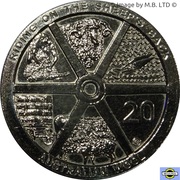 A six spoke wheel. From the top spoke, a Ram with full fleece, Hand Sheers, 20 G, many Sheep roaming, Bales of wool on a cart, Shearer shearing a sheep

Lettering:
RIDING ON THE SHEEP'S BACK
20 G
AUSTRALIAN WOOL

This NCLT Copper-nickel 20 cent coin was released by the RAM in two different Two Coin Sets, (UNC & Proof).
The coins were commemorating 200 Years of Wool Exporting from Australia to the rest of the world.
The other coin in the sets was an Aluminium-bronze NCLT $1 coin (KM# 1503)
This was the Uncirculated Set. 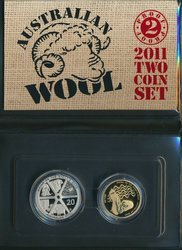 Some coins were also released in RAM Rolls (7,500)

The arrival of the Merino Sheep with the First Fleet in 1788 began one of Australia's most successful industries. After the first commecial wool export to England in 1811 it was often said that Australia "Rode on the sheeps back" as wool became the foundation of our burgeoning economy.