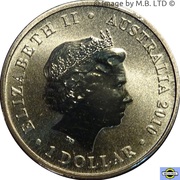 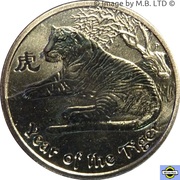 Depiction of a Tiger at rest facing left, chinese symbol for Tiger to left.

Lettering:
Year of the Tiger
P

Struck by the Perth Mint but issued exclusively by Australia Post in a PNC (15,000 Copies).