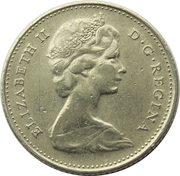 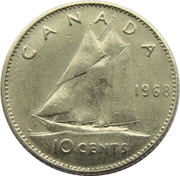 The portrait of Queen Elizabeth II facing right from when she was 39 years old, surrounded with the inscription "ELIZABETH II D • G • REGINA"

The "Blue Nose" under sail, a Canadian schooner from Nova Scotia, a celebrated racing ship and a symbol of the province, with the value below and the country name above

Collectors would discover if the reeding along the coin’s edge had flat bottoms like U.S. coins, it was a product of Philadelphia; if the reeding contained V-shaped bottoms, then it was struck at Ottawa. Reeding is formed on a coin at the moment of striking when the dies squeeze the planchet and force it against the reeding pattern on the collar. The different styles of reeding likely didn’t matter to the RCM if it was considered at all since it was probably easier for Philadelphia to just use their dime collars. As a result, the coins have the same diameter as a U.S. dime, 17.91 mm.

This lack of identification is said to have also made the coins theoretically illicit. According to coin expert Alan Herbert, “the Philadelphia strikes were technically illegal under Canadian law, which requires that anything imported has to show the country of origin. The Royal Mint later admitted bending the rule.”

Coins from the Philadelphia Mint have reeding that has 99 sharper, flat-bottomed grooves and a bigger ship on the reverse.