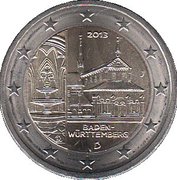 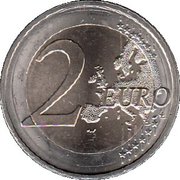 The inner part of the coin depicts the Maulbronn Monastery which is home to the most perfectly preserved medieval monastery complex north of the Alps. Founded in 1147, this complex has been a UNESCO World Heritage Site since 1993. On the top, the year of issuance ‘2013’. At the bottom, the inscription BADEN-WÜRTTEMBERG and underneath the indication of the issuing country ‘D’. The mint mark, represented by the letter A, D, F, G or J, is located at the right hand side. At the bottom left the initials of the artist. The coin’s outer ring depicts the 12 stars of the European flag.