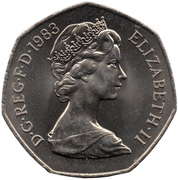 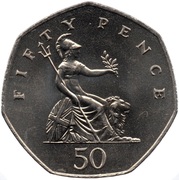 A figure of Britannia seated beside a lion, with a shield resting against her right side, holding a trident in her right hand and an olive branch in her left, denomination below and legend above.

In 1982, 11 years after Decimalisation Day on 15th February 1971, the word 'NEW' was removed from the denomination on the reverse, so the legend now reads 'FIFTY PENCE'.

1984 dated pieces were not struck for circulation and can only be found in Royal Mint annual Brilliant Uncirculated & Proof sets.