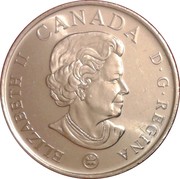 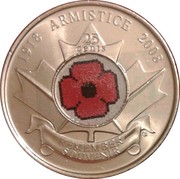 90th Anniversary of the end of World War I

The design is based on the earlier poppy coin, issued four years ago. In the middle of a maple leaf, a poppy, the symbol of remembrance of the sacrifice in World War I and other wars, is coloured in red - and surrounded with the legend "REMEMBER SOUVENIR", the face value and the inscription "ARMISTICE"