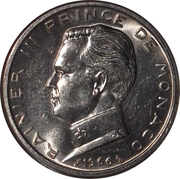 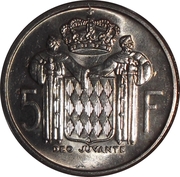 Pierre Louis Aristide Turin, born August 3, 1891 in Sucy-en-Brie where he died on July 25, 1968, is a French engraver and medalist. He is mobilized in August 1914 when the First World War broke out. In 1920, he received the first grand prix of Rome in engraving of medal and fine stone, then a gold medal in the specialized exhibition of 1925. In 1928, competing for the Monnaie de Paris, he was chosen to create a new type of currency at the head of Marianne who will bear his name: the "Turin type". This model of engraving was used for the pieces of ten francs until 1949 and twenty francs until 1939, then declined in the French colonies.

This value is given for information purpose only. It is based on a price of silver at 712 USD/kg. Numista does not buy or sell coins or metal.

» Buy coins from Monaco at eBay