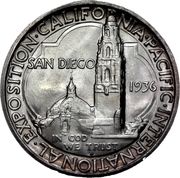 Seated Minerva, Goddess of wisdom, holding a spear in one hand and a shield with the other, a cornucopia next to the shield, a grizzly bear In front of the spear, and a ship, a gold miner, and mountains in the background

Chapel of St. Francis, and the California Tower

The issue commonly referred to as the San Diego Half Dollar was authorized to mark the California-Pacific International Exposition.

The obverse design was based on elements of the California State Seal. Minerva is seated with a spear and shield bearing the word “Eureka”, a grizzly bear is to her left, a horn of plenty is to the right, and a ship and miner at work appear in the background. Inscriptions read "United States of America”, “Liberty”, and “Half Dollar”. The reverse image includes two of the exposition buildings, the observation tower and the State of California building. The words “California Pacific International Exposition” appear in a circle around the image, with “In God We Trust”, “San Francisco”, and the date in the center. The designer of the coin was Robert Aitken, best known for his design of the 1915-S Panama Pacific $50 Gold Piece.

The full maximum authorized mintage of 250,000 pieces was struck at the San Francisco Mint in 1935 and sales began at the price of $1 each. After slow initial sales, the exposition sought and received Congressional approval to send back 180,000 of the unsold coins to be melted and reminted with the 1936 date. The 1936-dated coins would be struck at the Denver Mint and offered for sale at $1.50 each. Meanwhile, a remaining quantity of the 1935-dated coins was offered at $3 each. Later, the cost of the 1936 coins was also raised to $3 each.

Despite these efforts, sales progressed even more slowly. Eventually, 150,000 of the 1936 coins were sent back to the Mint for melting. After the entire convoluted process, total sales were 100,224 out of the 250,000 maximum authorized mintage.

For present-day collectors, this issue remains widely available and relatively affordable even in grades up to MS66.

Bullion value: USD 7.02 Search tips
This value is given for information purpose only. It is based on a price of silver at 624 USD/kg. Numista does not buy or sell coins or metal.