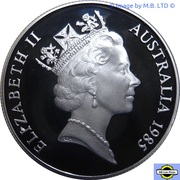 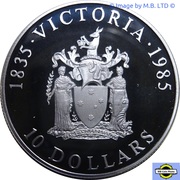 Coat of Arms of Victoria:
A Blue Shield supported by two Female Figures representing Peace and Prosperity. Inside the Shield the Southern Cross. A crest of a Demi Kangaroo with the Crown of St. Edward in its Paws. 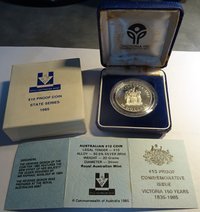 This 1985 $10 coin is the first of a series which features the coat of arms of the individual States and Territories of the Commonwealth of Australia. This year, 1985, marks the sesquicentenary of the State of Victoria. The coin reflects this event by featuring the official Victorian Coat of Arms.