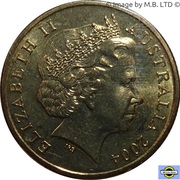 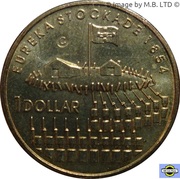 Colonial military forces arrayed in front of the famed Eureka Stockade. Flying over the stockade is the symbolic Eureka Flag with the stars of the Southern Cross prominent.

To commemorate the 150th anniversary of the end of the Eureka Stockade the RAM released an NCLT Aluminium-bronze dollar coin with (C), (E), (S), (B), and (M) Counterstamps. These were available for General Sale, and at various Royal & Coin Shows throughout the Country in a folding Coincard. At some of the Coin Shows they were able to be Counterstamped using the Mobile Press. Three coins are known to have escaped without a Counterstamp. 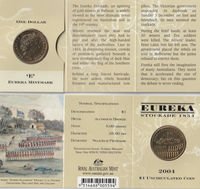 1854 saw the biggest act of rebellion in the short history of Australia at Ballarat in the Colony of Victoria. Some 10-15,000 miners protesting against extremely high mining license fees, corrupt government agents, and the total lack of rights for miners (such as the rights to own land and the right to vote) formed the Ballarat Reform League. Over the period of a few weeks they organised a rag tag military force, designed and flew their own Eureka flag (the famous blue and white southern cross flag used to this day as a sign of protest) In December 1854 a combined force of police and soldiers marched to Ballarat intent on putting the rebellion down. The miners fortified themselves within a shabby barricade of wagons and timber (the "Eureka Stockade").

A Fine Silver (.999) Proof version of the coin was also released in a plush square blue box with numbered certificate but without a Mintmark or Counterstamp.