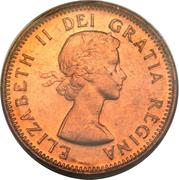 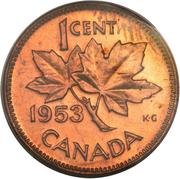 This coin has some varieties known as 'Shoulder fold' (SF) and 'No shoulder fold' (NSF). This was due to weak relief on dies, and accidental reuse of the old dies. These varieties can be found in the years 1953, 1954 and 1955, with the 1955 NSF being the rarity. Since it is difficult to differentiate SF from NSF, it is helpful to look at the "I" in "DEI". If it points directly to a denticle, it is the SF obverse. If pointing in between two denticles, it is the NSF obverse.