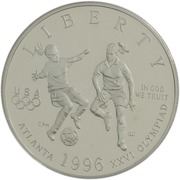 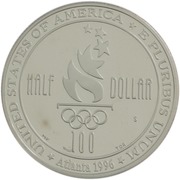 The Olympic Flame, Olympics logo, and “100” arranged in the form of a torch.

The 1996 Olympic Soccer Half Dollar was one of four different commemorative half dollar coins issued for the Atlanta XXVI Olympiad Summer Games. The program also included eight different silver dollars and four different $5 gold coins. The large number of coins began to discourage some collectors from commemorative coin collecting.

The 1996 Soccer Half Dollar had a maximum authorized mintage of 3,000,000 coins. Like all issues of the 1995-1996 Olympic Commemorative Coin program, this proved to be overly optimistic. About 165,000 coins were ultimately sold across the proof and uncirculated versions of the coins. This lower sales figure actually worked in the favor of collectors who purchased the coins, as they now carry premiums on the secondary market.