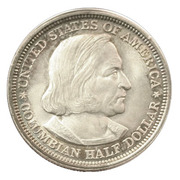 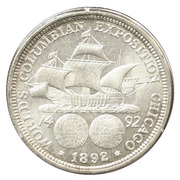 The ship Santa Maria sailing to the left over 2 half planispheres that divides the date 1492. Legend around, date below.

This coin was produced for the  World's Columbian Exposition that took place between the 1st of may  to October 30, 1893 in Chicago,  Illinois. It celebrated the 400th anniversary of the arrival of Columbus to America.

According to Tom DeLorey, COINage, May 2016, p. 9, the Columbian Exposition half dollar "came about when the organization putting on the World’s Fair requested a grant from the U.S. Treasury of $5 million to help build the fairgrounds so it could open." The Treasury, however, gave "only $2.5 million due to the prevailing hard economic times." DeLorey goes on to say that someone "connected with the Fair Authority got the brilliant idea that if the Treasury would provide the $2.5 million in the form of five million commemorative half dollars," then the Fair would need only "to sell the coins for a dollar each" in order to obtain the extra $2.5 million dollars needed. Because of hard economic times, however, "only a few hundred thousand were sold at the premium, the rest were either released into circulation at face value or melted."

Bullion value: 6.52 USD Search tips
This value is given for information purpose only. It is based on a price of silver at 579 USD/kg. Numista does not buy or sell coins or metal.