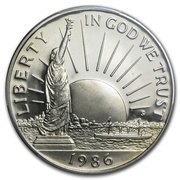 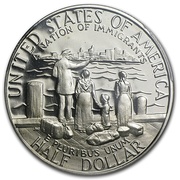 A ship of immigrants entering New York Harbor with a skyline (circa 1913), and an image of the Statue of Liberty in the foreground with a rising sun in the background

Lettering:
LIBERTY IN GOD WE TRUST
1986

Translation:
United States of America
A Nation of Immigrants
Out of Many, One
Half Dollar

Sherl Joseph Winter is a professional sculptor-engraver who has worked with several private Mints in the design and execution of over 300 medals. He worked for sixteen years as a sculptor-engraver at the United States Mint at Philadelphia, where he was appointed Acting Chief-Engraver upon the retirement of Frank Gasparro.

The 1986 Statue of Liberty Half Dollar was one of three commemorative coins issued to celebrate the 100th anniversary of the dedication of the Statue of Liberty. The other two coins included a silver dollar and $5 gold piece. Notably, the half dollar was the first commemorative coin for this denomination struck in the copper-nickel clad composition.

Since the coins did not contain precious metals content, the pricing was the lowest for the program at $5 or $6.50 for uncirculated and proof versions during a “pre-issue” period. The regular pricing was $6 or $7.50. The total mintage exceeded 7 million pieces.