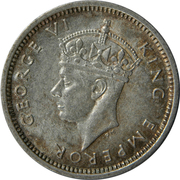 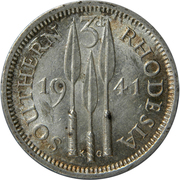 Portrait of George VI, King of the United Kingdom and the British Dominions from 1936 to 1952.

Three spears splitting date, denomination at the top, name around

Bullion value: USD 0.94 Search tips
This value is given for information purpose only. It is based on a price of silver at 720 USD/kg. Numista does not buy or sell coins or metal.