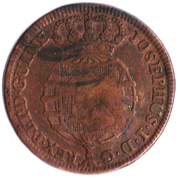 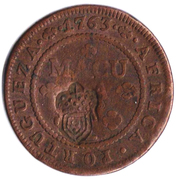 Countermarked ½ Macuta KM#11.
The Edict of March 21, 1837 initiated the used of crowned arms countermarks on various circulating coinage. The mark doubled the host coin´s face value. A second edict was issued March 1, 1853 extending the use of these marks for the same purpose of doubling face value.