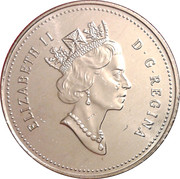 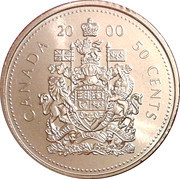 The Royal Coat of Arms of Canada, proclaimed by King George V on November 21, 1921 and updated in 1994, are surrounded with the face value and the inscription "CANADA"

Translation: From Sea To Sea.

The design on the Canadian fifty cent coin depicts the coat of arms of Canada.  The centre shield displays symbols of Canada's earliest settlers including three lions for England, three fleurs-de-lis of France, a rearing lion for Scotland and the Irish harp.  At the left is the lion of England holding the flag of Great Britain and to the right a Scottish unicorn with the flag of  royalist France. The motto "A Mari Usque Ad Mare", written on the banner at the bottom is Latin for "From Sea To Sea".