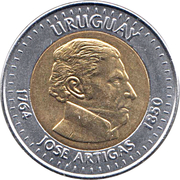 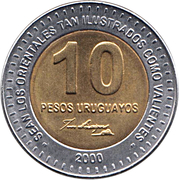 Portrait of Jose Gervasio Artigas (national hero) facing right; short name of the country on top ("URUGUAY" instead of the usual "REPUBLICA ORIENTAL DEL URUGUAY"), dates of birth and death of Artigas.

Denomination on center, surrounded by one of Artigas' phrase: "SEAN LOS ORIENTALES TAN ILUSTRADOS COMO VALIENTES" (="be Orientals - one of names given to Uruguayan people - so enlightened as braves") Signature of Artigas, date on exergue.

Translation:
Be the Orientals as enlighted as braves
10
Pesos Uruguayos
José Artigas (signature)
2000

The Artigas motto "Be the Orientals as enlighted as braves" was proclaimed the day the first Public Library was opened at Montevideo. Orientals is other name given to Uruguayans, and comes from the country name Republica Oriental del Uruguay, making refference the country is placed towards East (Orient) from Uruguay river.

In spite all coins show date 2000, there were 2 different stikes; the first one was minted at Buenos Aires on 2004, and the second on 2006 at Canadian Mint.

The design is the same, and the only difference is on date, where Canadian version have a 5-pointed star on each side of the date, while there are not on the Buenos Aires coins.