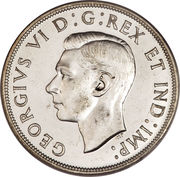 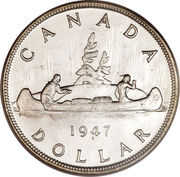 The portrait in left profile of George VI is surrounded with the inscription "GEORGIVS VI D:G:REX ET IND:IMP" (George VI, King and Emperor of India by the grace of God)

Note that the engraver's initials 'HP' appear below the portrait of the King. There are three varieties that revolve around these initials: double HP, triple HP and quadruple HP. The varieties come from double, triple or quadruple striking of these initials. In 1945, only the Double HP exists. But for 1947, all four varieties can be found.

Translation: Georges VI, King and Emperor of India by the grace of God

A voyageur and an aboriginal travelling by canoe, carrying bundles of which one bears the initials "H.B." for Hudson's Bay Company, are surrounded with the face value and the inscription "CANADA" 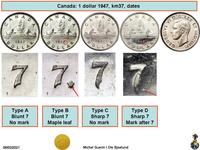 Bullion value: USD 11.24 Search tips
This value is given for information purpose only. It is based on a price of silver at 602 USD/kg. Numista does not buy or sell coins or metal.