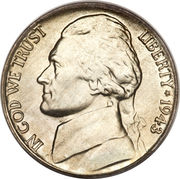 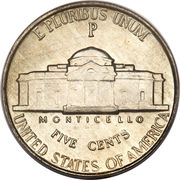 The portrait of Thomas Jefferson, the 3rd President of the United States from between 1801 to 1809, facing left surrounded with the lettering "LIBERTY" and the motto "IN GOD WE TRUST"

A representation of Monticello, President Thomas Jefferson's Virginia home, accompanied by the legend "MONTICELLO" and surrounded with the face value in full, the motto "E PLURIBUS UNUM" and the lettering "UNITED STATES OF AMERICA".

Translation:
Out of Many, One
p
Monticello
Five Cents
United States of America

The high demand for nickel during World War II resulted in the temporary change of the nickel (5 cent coin). 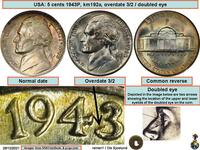 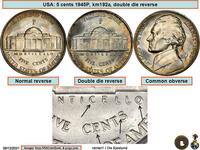 These coins can be differentiated between other coins from 1942 that were made of copper-nickel by seeing where the mintmark is located. If there is a mintmark on the reverse above Monticello, it is a war nickel (this coin). If it is not, then it belongs to the transition year (KM#192)

Guenuine coins of certain dates struck in nickel by error are known to exist.

This value is given for information purpose only. It is based on a price of billon at 0 USD/kg. Numista does not buy or sell coins or metal.