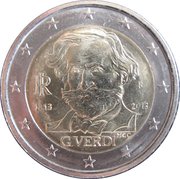 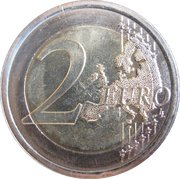 200th Anniversary of the Birth of Giuseppe Verdi

The design shows the bust of Giuseppe VERDI in three quarter view facing left; on the left, superimposed letters of the Italian Republic monogram ‘RI’/1813; on the right, R (monogram of the Mint of Rome)/2013; in exergue, MCC (monogram of the Author Maria Carmela COLANERI)/G. VERDI. The coin’s outer ring bears the 12 stars of the European Union.