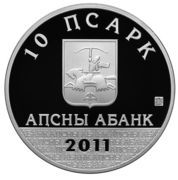 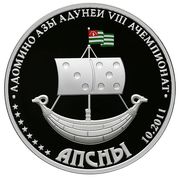 “In the upper central part, a relief image of the Bank of Abkhazia emblem is depicted. Underneath the relief image, there is an inscription in Abkhazian language “Apsny Abank”. Above the emblem, there is an inscription showing the coin’s denomination of 10 apsars. On the right side of the coin, there is a manufacturer’s stamp of the mint, which also indicates a metal of the D.I. Mendeleev’s periodic table and the coin’s fineness. In the lower part of the coin, against the background of an inscription “Apsny Abank”, the year of mintage is indicated “2011”.

8 stars with "VIII World Domino Championship 10-2011" written around Domino shaped sail boat in the center. Colored waving Abkhazia flag on top of the boat. "Апсны" (Abkhazia) written in Abkhazian language at the bottom.

Bullion value: 24.74 USD Search tips
This value is given for information purpose only. It is based on a price of silver at 788 USD/kg. Numista does not buy or sell coins or metal.