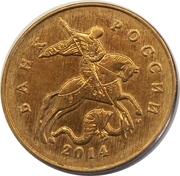 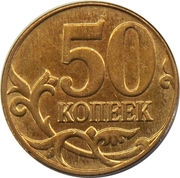 In the center — the relief image of Saint George the Warrior on horseback killing a serpent with a spear;
• to the right below, under the front hoof of the horse — the Cyrillic letters М (Moscow) or С-П (Saint Petersburg), indicating the mint-producer;
• above from the left to the right — the inscription along the rim: “БАНК РОССИИ” (BANK OF RUSSIA) divided by the figure of Saint George the Warrior;
• below under the image of the serpent — the year of mintage.

Slightly to the right of the center is the denomination of the coin: with the number 50 above“КОПЕЕК” written horizontally at the bottom of the disc and a stylized vegetable ornament in form of two branches below

Two types of this coin exist. 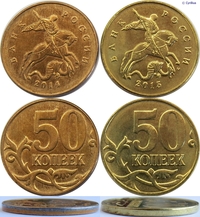