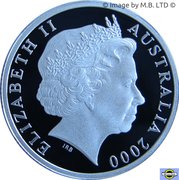 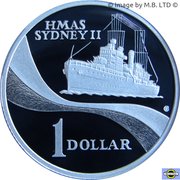 Image of the warship "HMAS Sydney II" above waves
Denomination below

In 2000 the RAM released this NCLT Fine Silver (.999) Proof coin to remember those who lost their lives on the HMAS Sydney II. The coin was issued in limited numbers in a capsule held within a plush square box with numbered certificate.

The RAM also released an Aluminium-bronze version of this coin in a coincard with "C" and "S" Mintmarks.

On 19 November 1941 the HMAS Sydney II sank after heavy combat action with the German auxiliary cruiser Kormoran. The Sydney, the second such Australian ship to carry the name, sank with the loss of all 645 crew. It is the largest Australian naval loss on a single Australian warship and was the largest loss of life on an Allied ship in WW2 where all hands were lost. The exact circumstances of the tragic loss remain unclear to this date, and it was only in March 2008 that the wrecks of both the Sydney and Kormoran were located off the coast of Western Australia after many years of fruitless searching.

Bullion value: 9.72 USD Search tips
This value is given for information purpose only. It is based on a price of silver at 834 USD/kg. Numista does not buy or sell coins or metal.