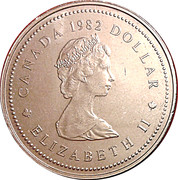 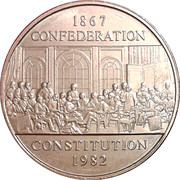 A reproduction of the famous painting of the Fathers of Confederation depicting negotiations that would lead to the enactment of the British North America Act, 1867, that is Constitution Act, 1867, is framed by the legends "1867 CONFEDERATION" and "CONSTITUTION 1982"