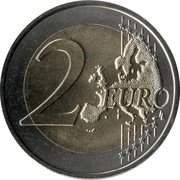 The inner part of the coin features the Thessalonian brothers Constantine and Methodius on either side of the symbolic double cross standing on three hills. The cross is moreover held like a Bishop’s crozier, thereby bringing together the symbols of statehood and Christianity, and emphasising the significance of the brothers’ mission, which helped ensure the full sovereignty and legitimacy of Great Moravia — the first Slav state in central Europe. The figure of Constantine is holding a book that represents education and faith, while Methodius is shown with a church to symbolise faith and institutional Christianity. Inscribed along the bottom edge of the inner part of the coin is the name of the issuing country, “SLOVENSKO”, as well as the years “863” and “2013”, all separated by a dash. Along the upper edge of the inner part are the names “KONŠTANTÍN” and “METOD”. Inscribed immediately to the left of the brothers are the stylised letters “mh” (the initials of the designer, Miroslav Hric), while the mint mark of Kremnica Mint (composed of the letters “MK” between two dies) is shown immediately to their right. The coin’s outer ring bears the 12 stars of the European Union.

Europe on the right next to the value 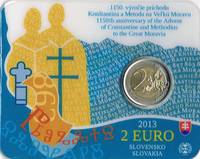 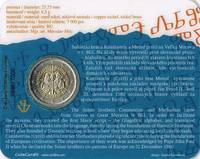