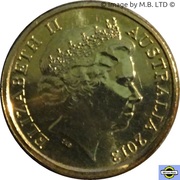 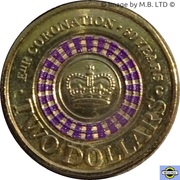 St Edward’s Crown surrounded by circles including a pattern of purple coloured, the colour synonymous with royalty stripes

An Uncirculated version with the "C" Mintmark was also released in a folding collector Coincard. These are now fetching very high prices on the secondary market.