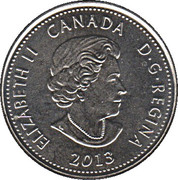 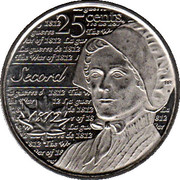 Translation:
Canada
Elizabeth II, Queen by the Grace of God
2013

Portrait of Laura Secord (right), with frosty relief and Canadian flag on left in which '1812' is inscribed.

Laura Secord was a Canadian heroine during the War of 1812 between the United States of America and the British Empire (supported by Indigenous American peoples). She is known for walking 32 km out of American territory to warn British forces of an impending attack in 1813. Ultimately, the British and Indigenous forces ambushed the Americans.