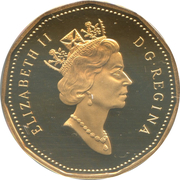 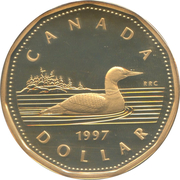 A Canadian loon, swimming on a lake, with the country name at the top, the date below, and the denomination at the bottom. The designer's initials to the right.

Robert-Ralph Carmichael (1937 – July 16, 2016) was a Canadian artist who designed the image of the common loon on the reverse side of the Canadian one-dollar coin.

The majority of collector coins are produced at the Ottawa Mint. Circulation coins have been struck in Winnipeg since 1976.